The RTK Express is a fully enclosed, preprogrammed device. There are very few things to worry about or configure but we will cover the basics. 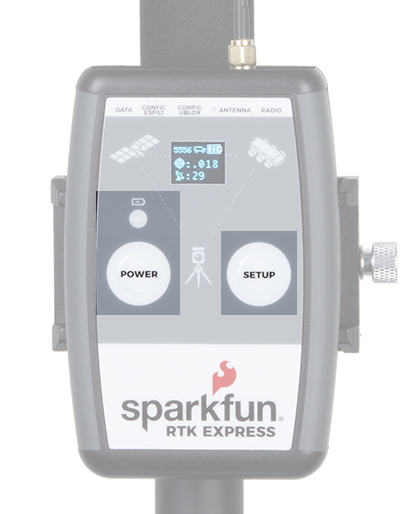 This device can be used in four modes:

At power on the device will enter Rover or Base mode; whichever state the device was in at the last power down. When the SETUP button is pressed the RTK Express will toggle between Rover and Base mode. The display will indicate the change with a small car or flag icon.

In Rover mode the RTK Express will receive L1 and L2 GNSS signals from the four constellations (GPS, GLONASS, Galileo, and BeiDou) and calculate the position based on these signals. Similar to a standard grade GPS receiver, the RTK Express will output industry standard NMEA sentences at 4Hz and broadcast them over any paired Bluetooth device. The end user will need to parse the NMEA sentences using commonly available mobile apps, GIS products, or embedded devices (there are many open source libraries). Unlike standard grade GPS receivers that have 2500m accuracy, the accuracy in this mode is approximately 300mm horizontal positional accuracy with a good grade L1/L2 antenna.

When the device is in Rover mode and RTCM correction data is sent into the radio port or over Bluetooth, the device will automatically enter Positioning with RTK mode. In this mode RTK Express will receive L1/L2 signals from the antenna and correction data from a base station. The receiver will quickly (within a few seconds) obtain RTK float, then fix. The NMEA sentences will have increased accuracy of 14mm horizontal and 10mm vertical accuracy. The RTCM correction data can be obtained from a cellular link to online correction sources or over a radio link to a 2nd RTK Express setup as a base station.

In Base mode the device will enter Base Station mode. This is used when the device is mounted to a fixed position (like a tripod or roof). The RTK Express will initiate a survey. After 60 to 120 seconds the survey will complete and the RTK Express will begin transmitting RTCM correction data out the radio port. A base is often used in conjunction with a second RTK Express (or RTK Surveyor) unit set to 'Rover' to obtain the 14mm accuracy. Said differently, the Base sits still and sends correction data to the Rover so that the Rover can output a really accurate position. You’ll create an RTK system without any other setup.

The RTK Express has a built-in 1300mAh lithium polymer battery that will enable over 5 hours of field use between charging. If more time is needed a common USB power bank can be attached boosting the field time to 40 hours. 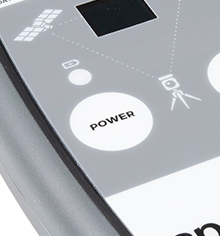 The Charge LED is located above the Power button. It will illuminate any time there is an external power source and will turn off when the internal battery is charged. With the unit fully powered down, charging takes approximately 1.5 hours from a 1A wall supply or 3 hours from a standard USB port. The RTK Express can run while being charged but it increases the charge time. Using an external USB battery bank to run the device for extended periods or running the device on a permanent wall power source is supported. 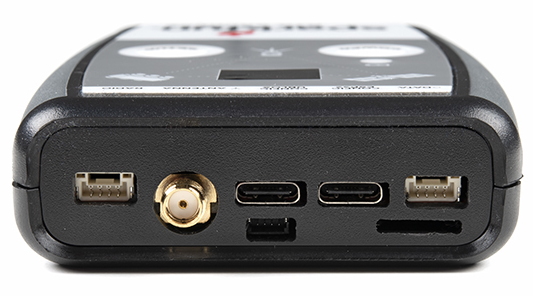 The SparkFun RTK Express has a variety of connectors

This SMA connector is used to connect an L1/L2 type GNSS antenna to the RTK Express. Please realize that a standard GPS antenna does not receive the L2 band signals and will greatly impede the performance of the RTK Express (RTK fixes are nearly impossible). Be sure to use a proper L1/L2 antenna. 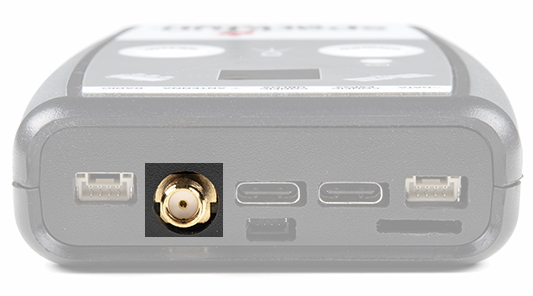 This USB C connector is used for charging the device and/or directly configuring and inspecting the ZED-F9P GNSS receiver using u-center. It’s not necessary in normal operation but is handy for tailoring the receiver to specific applications. As an added perk, the ZED-F9P can be detected automatically by some mobile phones and tablets. If desired, the receiver can be directly connected to a compatible phone or tablet removing the need for a Bluetooth connection. 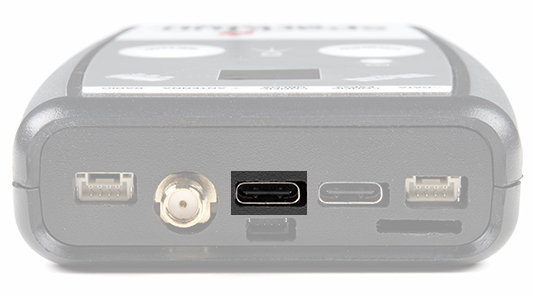 This USB C connector is used for charging the device, configuring the device, and reprogramming the ESP32. Various debug messages are printed to this port at 115200bps and a serial menu can be opened to configure advanced settings. 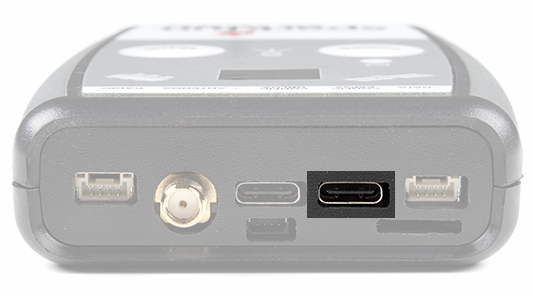 This 4-pin JST connector is used to allow RTCM correction data to flow into the device when it is acting as a rover or out of the device when it is acting as a base. The connector is a 4-pin locking 1.25mm JST SMD connector (part#: SM04B-GHS-TB, mating connector part#: GHR-04V-S). The RTK Express comes with a cable to interface to this connector but additional cables can be purchased. You will most likely connect this port to one of our Serial Telemetry Radios if you don’t have access to a correction source on the internet. The pinout is 3.5-5.5V / TX / RX / GND from left to right as pictured (pin labels are shown on the board itself). 3.5V to 5.5V is provided by this connector to power a radio with a voltage that depends on the power source. If USB is connected to the RTK Express then voltage on this port will be 5V (+/-10%). If running off of the internal battery then voltage on this port will vary with the battery voltage (3.5V to 4.2V depending on the state of charge). While the port is capable of sourcing up to 2 amps, we do not recommend more than 500mA. This port should not be connected to a power source. 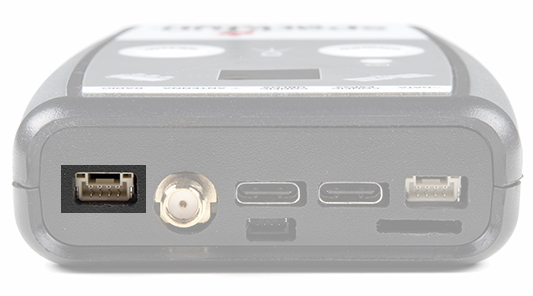 This 4-pin JST connector is used to output and input a variety of data to the RTK Express. The connector is a 4-pin locking 1.25mm JST SMD connector (part#: SM04B-GHS-TB, mating connector part#: GHR-04V-S). The RTK Express comes with a cable to interface to this connector but additional cables can be purchased.

Internally the Data connector is connected to a digital mux allowing one of four software selectable setups:

Most applications do not need to utilize this port and will send the NMEA position data over Bluetooth. This port can be useful for sending position data to an embedded microcontroller or single board computer. The pinout is 3.3V / TX / RX / GND. 3.3V from left to right as pictured (pin labels are shown on the board itself), which is provided by this connector to power a remote device if needed. While the port is capable of sourcing up to 600mA, we do not recommend more than 300mA. This port should not be connected to a power source. 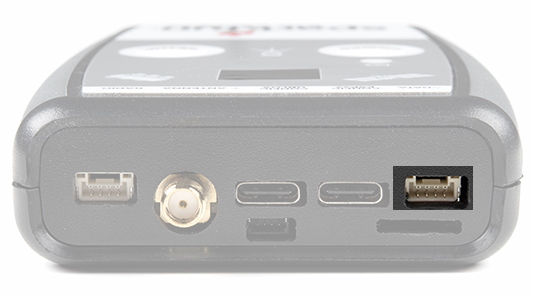 This slot accepts standard microSD cards up to 32GB formatted for FAT16 or FAT32. Logging any of 67 messages at up to 4Hz is supported for all constellations. 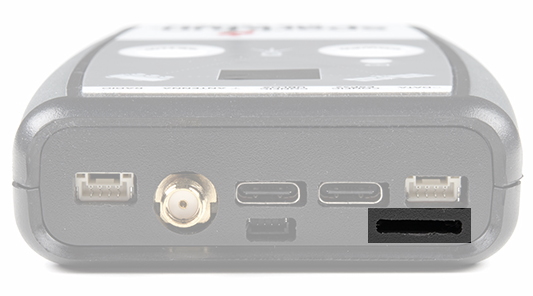 The following 67 messages are supported for logging:

This 4-pin Qwiic connector exposes the I2C bus of the ESP32 WROOM module. Currently, there is no firmware support for adding I2C devices to the RTK Express but support may be added in the future. 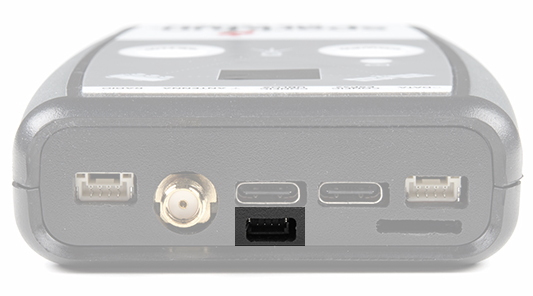 The RTK Express has a built in 1300mAh battery and consumes approximately 240mA worst case with Bluetooth connection active, GNSS fully tracking, and a 500mW radio broadcasting. This will allow for around 5.5 hours of use in the field. If more time is needed in the field a standard USB power bank can be attached. If a 10,000mAh bank is attached one can estimate 30 hours of run time assuming 25% is lost to efficiencies of the power bank and charge circuit within RTK Express.

To quickly view the state of charge, turn on the unit. The battery icon will indicate the following:

The RTK Express is a hacker’s delight. Under the hood of the RTK Express is an ESP32 WROOM connected to a ZED-F9P as well as some peripheral hardware (LiPo fuel gauge, microSD, etc). It is programmed in Arduino and can be tailored by the end user to fit their needs. 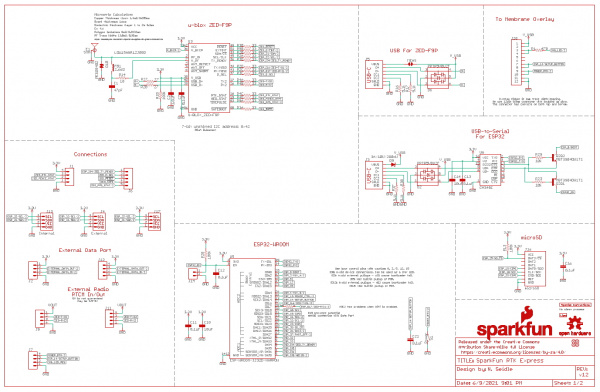 ->Click on the image to get a closer look at the Schematic!<-

The ZED-F9P GNSS receiver is configured over I2C and uses two UARTs to output NMEA (UART1) and input/output RTCM (UART2). In general, the ESP32 harvests the data from the ZED-F9Ps UART1 for Bluetooth transmission and logging to SD. 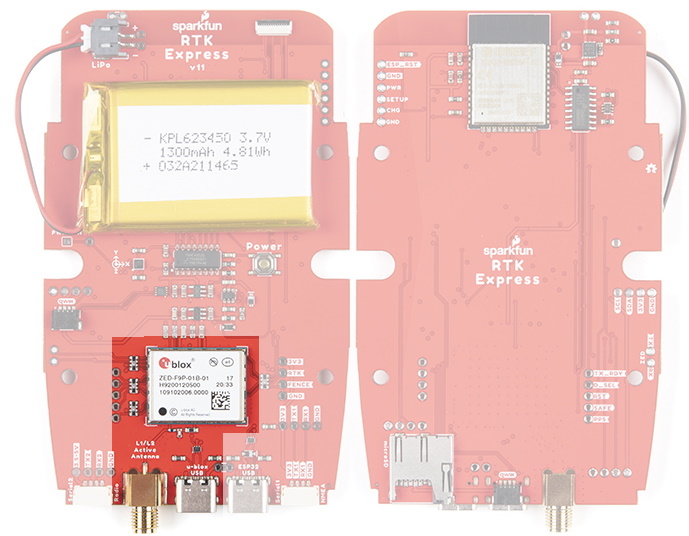 The ESP32 uses a standard USB to serial conversion IC (CH340) to program the device. You can use the ESP32 core for Arduino or Espressif’s IoT Development Framework (IDF).

The CH340 automatically resets and puts the ESP32 into bootload mode as needed. However, the reset pin of the ESP32 is brought out to an external 2-pin 0.1” footprint if an external reset button is needed.

Note: If you've never connected a CH340 device to your computer before, you may need to install drivers for the USB-to-serial converter. Check out our section on "How to Install CH340 Drivers" for help with the installation. 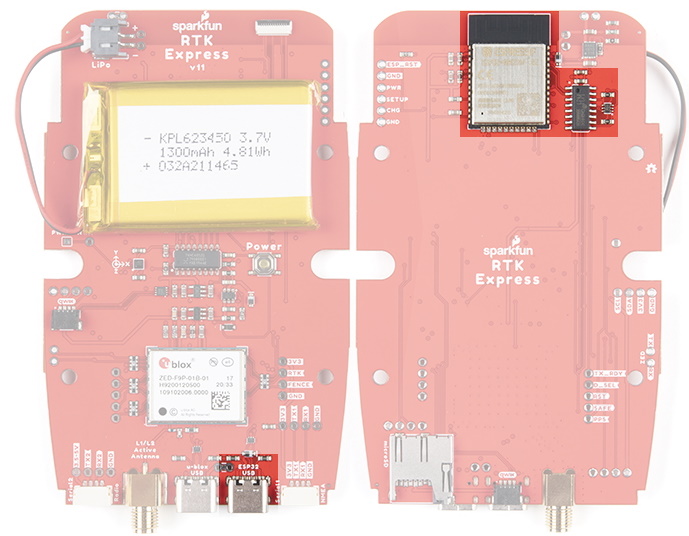 To facilitate the measurement of run, charge, and quiescent currents, two measurement jumpers are included. These are normally closed jumpers combined with a 2-pin 0.1” footprint. To take a measurement, cut the jumper and install a 2-pin header and use banana to IC hook cables to a DMM. These can then be closed with a 2-pin jumper. 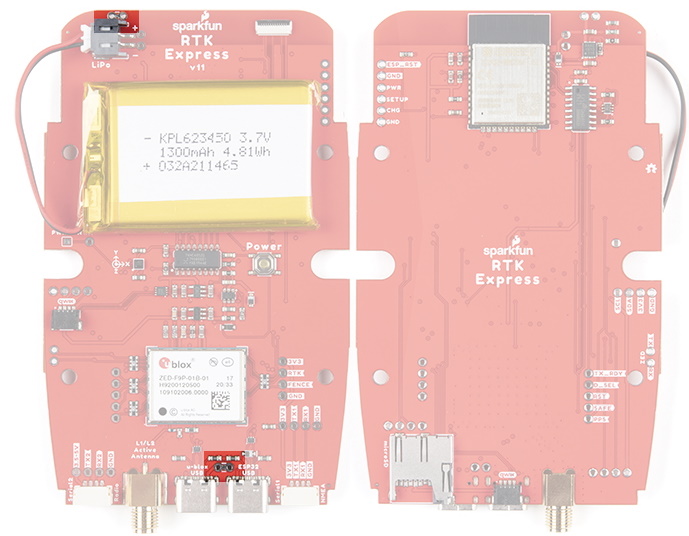 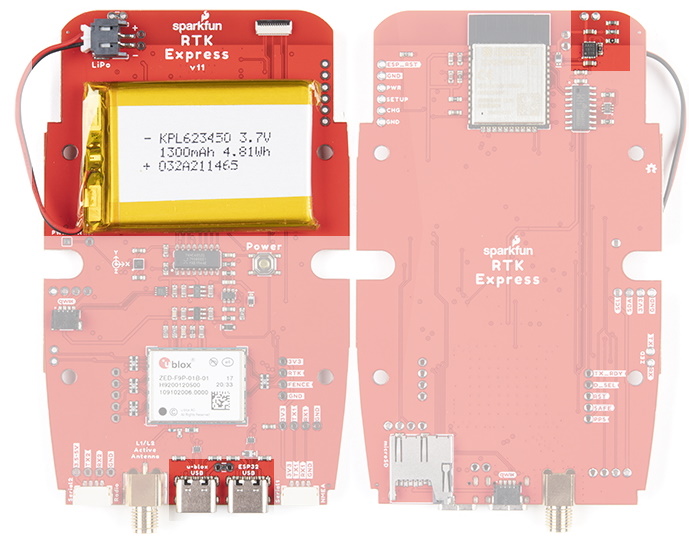 The MAX17048 is a simple to use fuel gauge IC that gives the user a statement of charge (SOC) that is basically a 0 to 100% report. The MAX17048 has a sophisticated algorithm to figure out what the SOC is based on cell voltage that is beyond the scope of this tutorial but for our purposes, allows us to reliably view the battery level when the unit is on.

The RTK Express also incorporates a the LIS2DH12 triple-axis accelerometer to aid in leveling in the field. 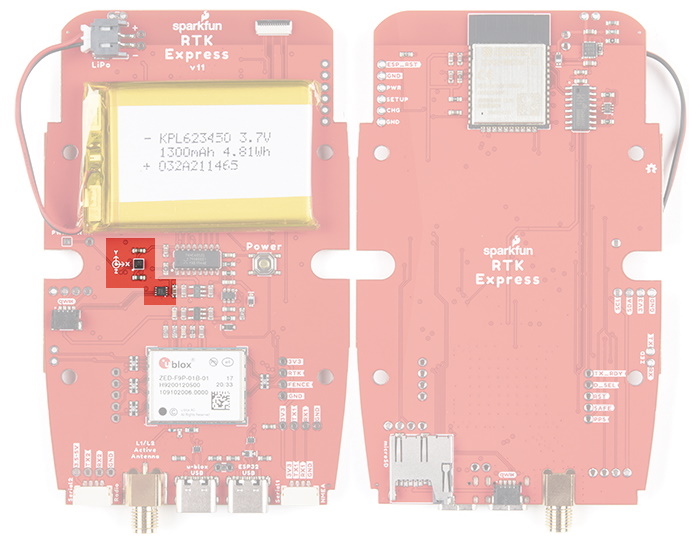 Two Qwiic connectors are included in the unit. The internal Qwiic connector connects to the OLED display attached to the upper lid. The lower Qwiic connector is exposed on the end of the unit. These allow connection to the I2C bus on the ESP32. Currently the stock RTK Express does not support any additional Qwiic sensors or display but users may add support for their own application. 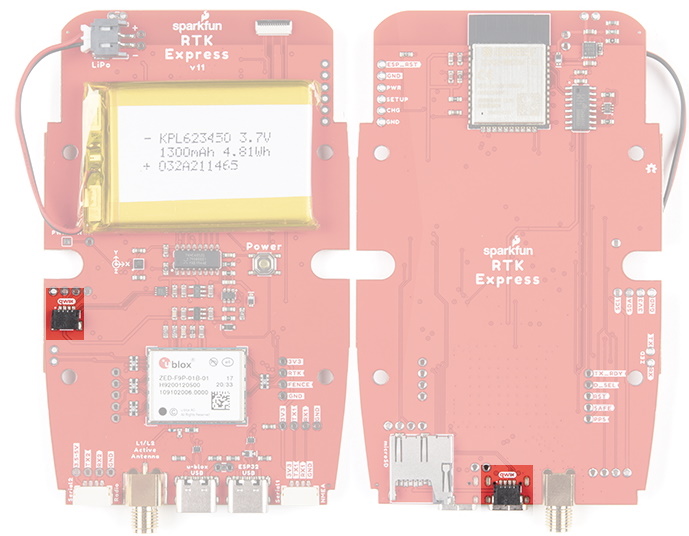 A microSD socket is situated on the ESP32 SPI bus. Any microSD up to 32GB is supported. RTK Express supports RAWX and NMEA logging to the SD card. Max logging time can also be set (default is 10 hours) to avoid multi-gigabyte text files. For more information about RAWX and doing PPP please see this tutorial. 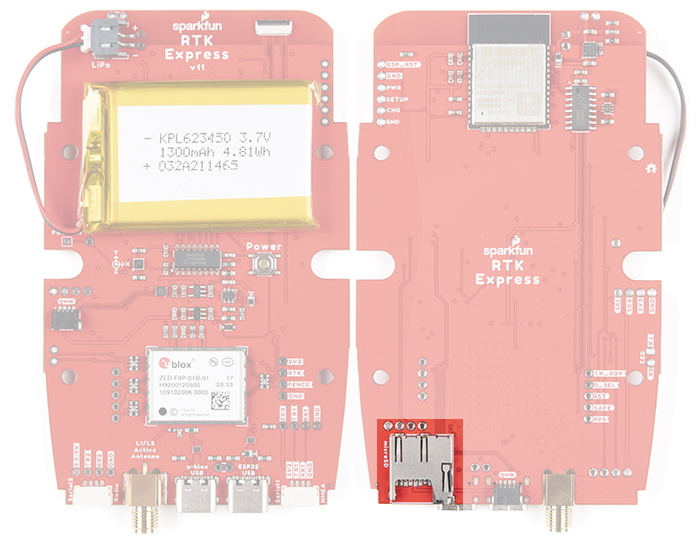 The 74HC4052 analog mux controls which digital signals route to the external Data port. This allows a variety of custom end user applications. The most interesting of which is event logging. Because the ZED-F9P has microsecond accuracy of the incoming digital signal, custom firmware can be created to triangulate an event based on the receiver's position and the time delay between multiple captured events. Currently, TM2 event logging is supported. 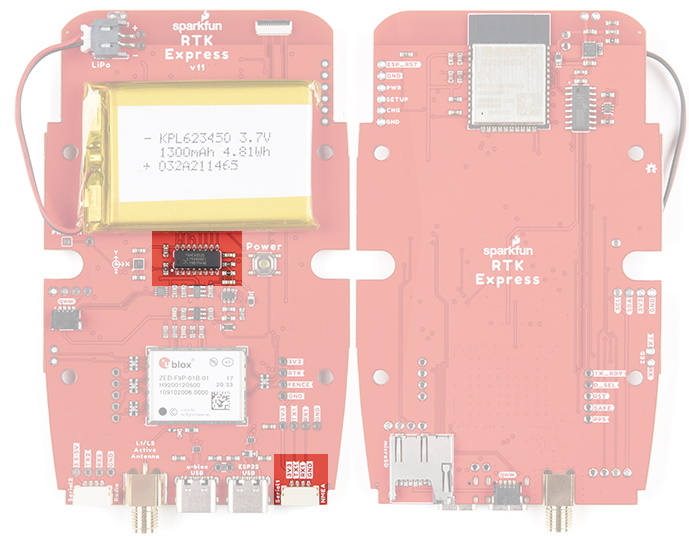