The RTK Facet, Facet L-Band, Express, and Express Plus utilize a 0.96" high-contrast OLED display. While small, it packs various situational data that can be helpful in the field. We will walk you through each display.

The device's firmware version is shown during the Power On display. 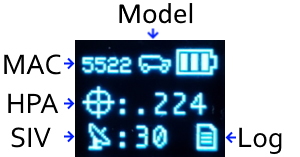 Upon power up the device will enter either Rover mode or Base mode. Above, the Rover mode is displayed.

Once NTRIP is enabled on your phone or RTCM data is being streamed into the Radio port the device will gain an RTK Fix. You should see the HPA drop to 14mm with a double circle bulls-eye as shown above.

Once the survey-in is complete the device enters RTCM Transmit mode. The number of RTCM transmissions is displayed. By default, this is one per second.

The Fixed Base mode is similar but uses a structure icon (shown above) to indicate a fixed base.

If the NTRIP server is enabled the device will first attempt to connect over WiFi. The WiFi icon will blink until a WiFi connection is obtained. If the WiFi icon continually blinks be sure to check your SSID and PW for the local WiFi.

Once WiFi connects the device will attempt to connect to the NTRIP mount point. Once successful the display will show 'Casting' along with a solid WiFi icon. The number of successful RTCM transmissions will increase every second.

L-Band decryption keys are valid for a maximum of 56 days. During that time, the RTK Facet L-Band can operate normally without the need for WiFi access. However, when the keys are set to expire in 28 days or less, the RTK Facet L-Band will attempt to log in to the 'Home' WiFi at each power on. If WiFi is not available, it will continue normal operation.

The unit will display various messages to aid the user in obtaining keys as needed.

Adding a Display to the RTK Surveyor

While the RTK Surveyor works very well using only LEDs, it is possible to add an external display. The SparkFun Micro OLED Breakout (Qwiic) can be attached to the Qwiic connector on the end of the Surveyor. At power on, the display will be automatically detected and used.